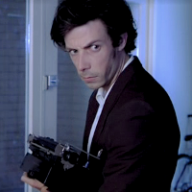 Good fiction isn't about escapism. It brings you closer to reality, to that which you share with the author. Doesn't remove you from it. May 7, 2017